Orreries used to be popular many years ago. They were mechanical models of the Solar System and were originally driven by turning a crank handle or by using a clockwork motor. Of course with the advent of modern computers and sophisticaed planetarium programs those old orreries have largely become obsolete. They generally suffered from using a number of incorrect assumptions, the main two being that the planets travel in circular orbits around the Sun and that they all move in the same plane. But despite these shortcomings they were reasonably accurate in predicting the movements of the planets across the night sky and they served to demonstrate the overall structure of the Solar System in a way that was easy to understand.

As should be obvious from its name the Electronic Orrery is a computerised version of the older mechanical models. It suffers from the same limitations as its mechanical ancestors. And because I created it many years ago when computer programming was less sophisticated it uses fairly primitive graphics. Having said all that it is quite fun to use and serves perfectly well as an early introduction to celestial mechanics and demonstates quite clearly the cause of a planet's retrograde motion. In casual use it can provide a ready reference to "what's up there tonight?". It will even predict the date(s) of future occulations of the planets. Children especially like watching the planets as they orbit around the Sun and the Moon as it orbits around the Earth. 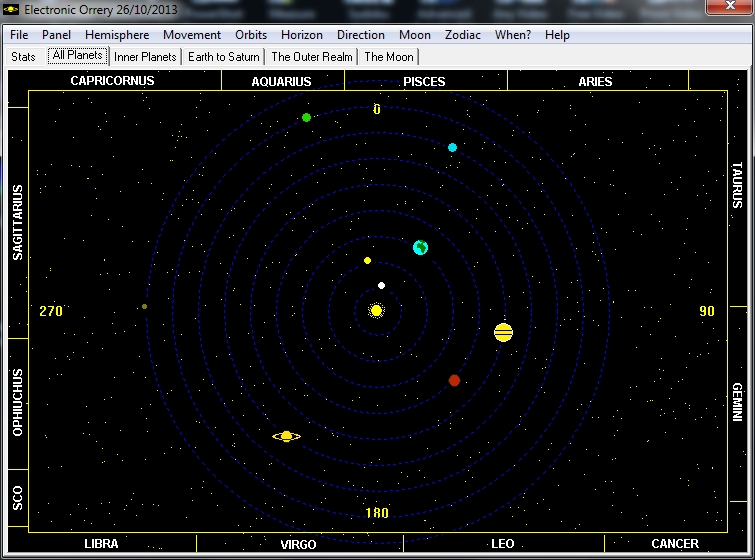 All planets' positions are plotted for 26th October 2013. The optional display of the planets' paths has been selected.
The above display shows that at 9 pm on 26th October 2013 Mars, Jupiter and Saturn are all below the horizon and therefore cannot be seen. When visible, Jupiter can be found in the constellation Gemini.
The above display shows the status of the Moon at 9 pm an 26th October 2013. For convenience it adopts an Aristotelian view with a stationary Earth at the center and a small Sun image moving through the constellations marked around the border. On this date the Sun is at the border between Virgo and Libra. A small Moon graphic circles the Earth and is located in Gemini. Superimposed on the small Moon graphic are two lines representing the side visible from the Earth and the side illuminated by the Sun. From this it can be seen why the Moon is nearing its last quarter phase as is demonstrated by the larger graphic shown in the top right hand corner.