Amateur astronomers jealously guard their hard won dark-adapted night vision. And astro-imagers prefer to isolate their imaging cameras and telescope equipment from light pollution. Computers (and particularly laptops) are now common accessories for such persons but the light given off by their computer screens is often the source of unwanted light pollution. If they are involved in an activity (such as exposing images with their astro-cameras) that involves keeping abreast of the progress of a set length of time they may appreciate having to hand an audible countdown clock. TalkingTimer provides a spoken countdown timer for such purposes. 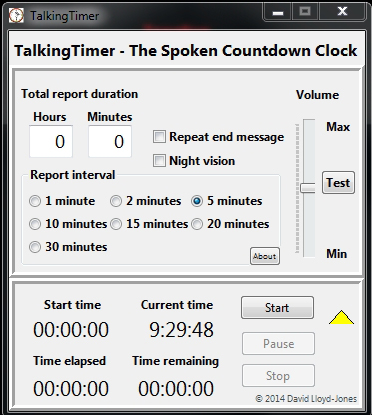 You start by entering the total length of the required countdown period in the "Hours" and "Minutes" entry boxes. The maximum period is 24 hours and the minimum is 1 minute. You then use the provided radio buttons to select the "Report interval". This is the time interval at which you will receive spoken progress updates. When the end of the countdown period is reached you will receive a spoken message saying so. Optionally you can check the "Repeat end message" checkbox to have that end message repeated continuously until you stop it by hitting the "Stop" button. To start the countdown simply hit the "Start" button. You can pause and later resume the countdown by using the "Pause" button. Checking the "Night vision" checkbox turns the application window red. The yellow arrow button can be used to collapse the window so as to show only the lower pane containing the clock and timer displays. Sensibly one might want to minimize the window once the countdown period has begun since the spoken progress reports make it unnecessary to keep the window on screen.
The download zipped file for TalkingTimer contains two sub-folders named "lib" and "sound". Make sure that these are installed in the same folder as the application file "TalkingTimer.exe".