Collimating a Schmidt-Cassegrain or some other catadioptric telescope involves de-focussing a star image to the point where a bright disc appears inside which is a smaller dark disk. The bright disc is actually an illuminated image of the primary mirror and the smaller dark disc is the silhouette of the secondary mirror. The telescope is correctly collimated only when the smaller dark disc is exactly centered within the larger bright disk. The telescope's collimation screws are adjusted until that exact centering is achieved. However it is often quite difficult to judge this by eye alone. With the advent of imaging cameras the two discs can easily be displayed on your computer screen in real time. This enables Telescope Circles to float two concentric circles over the de-focussed star image. By exactly matching the outer circle to the size of the bright disc and sizing the inner circle to match the dark disc it will immediately become apparent if the dark disc is not centered and therefore the telescope is out of collimation. You then use the collimation screws to center the dark disc on the inner circle to achieve perfect collimation. To help you with this the program can display on screen the positions of the three collimation screws so that you can better identify which one(s) to use.

Sometimes the frame size ratio (i.e. width : height) generated by your camera is not the same as the image size ratio displayed by your computer. In such a case this will result in some distortion of the de-focussed star image to the point where the bright and dark discs are not absolutely circular. If so, Telescope Circles lets you similary stretch the two circles to match the de-focussed star image. 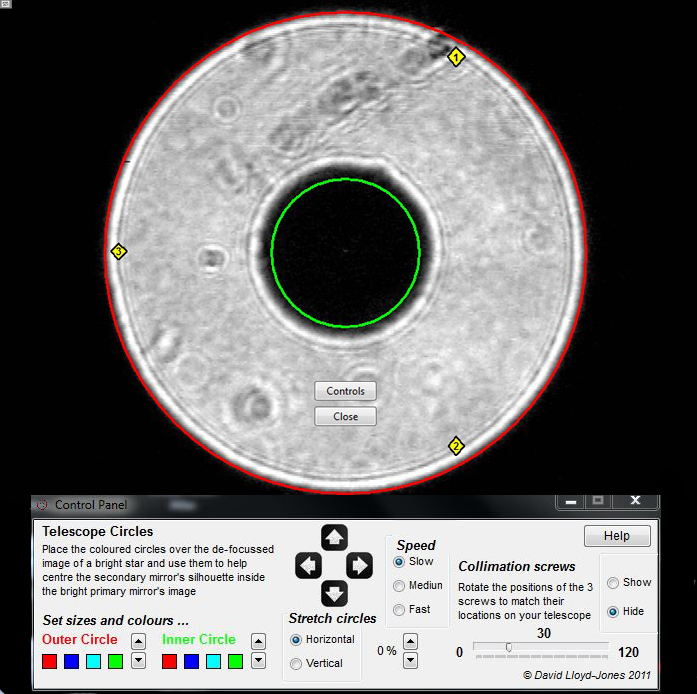 You use the Control Panel to move, size, colour and stretch the two circles and optionally display and move the collimation screw indicators into position. In this example the inner green circle shows that the dark disc is not exactly centered. The positions of the three collimation screw indicators show which screws to adjust to bring the dark disc concentric with the green circle.